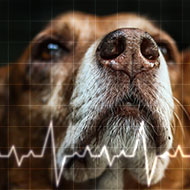 The sensor could help turn findings from sniffer dogs into measurable data.

A new health tracker sensor that can detect vital signs through fur or clothing has been developed by researchers at Imperial College London.

Researchers say the sensor, which can detect heart and breathing rates through fur and up to four layers of clothing, ‘could help make everyday wearables for pets and livestock a reality’.

It has been developed to help owners monitor their pets’ health and assist vets during surgery, without the need for shaving. The tracker could also be used to help improve the work of sniffer dogs and measure vital signs in humans without having direct contact with the skin.

The sensor is made out of a water and silicone material that houses a microphone that can detect sound waves.

Scientists say that it works like a ‘watery, squishy stethoscope’ - sticking tightly to the fur so that no air bubbles can get in and suppress the sound. The sound is then transmitted to a nearby portable computer so that the animal’s vital signs can be viewed in real-time.

So far, the sensor has only been tested on dogs and humans, but the researchers aim to adapt them for use on other animals, including livestock and horses. They are also integrating motion sensors so they can track an animal’s movement in real-time.

“Wearables are expected to play a major role in monitoring health and detecting diseases early,” explained lead author Dr Firat Guder, of Imperial’s Department of Bioengineering. “Our stretchy, flexible invention heralds a whole new type of sensor that can track the health of animals and humans alike over fur or clothing.”

The research on this new sensor is published in the journal, Advanced Functional Materials.