Cookie use on MRCVSonline
We use cookies to ensure that we give you the best experience on our website. If you continue without changing your settings, we will assume that you are happy to receive all cookies.
Accept Policy
Change cookie settings
Himalayan wolf discovered to be unique wolf adapted to high altitude life 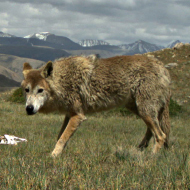 The Himilayan wolf in its trans-Himilayan habitat in far north-western Nepal, 5000m above sea level.

New research has revealed that the Himalayan wolf – previously thought to be a just another subspecies of grey wolf – is actually a genetically unique type of wolf, characteristically adapted to the harsh life in the high altitudes of Asia.

As a top carnivore in the Asian high altitudes, Himalayan wolves are considered critical to keeping their ecosystems healthy and balanced. But because very little is known about them, research has been minimal and no conservation action has been put in place.

Lead researcher, Dr Geraldine Werhahn from the University of Oxford’s Department of Zoology, says: “When we started out in 2014 it was surprising how little was known about these wolves inhabiting a relatively large region of our planet. At the time the scarce data available was indicating a genetic difference, but we had no explanation for why these wolves are different from a grey wolf.

“Now we know that these wolves are different, from genetics to ecology, and we have an indication of what the reason may be: the evolutionary fitness challenge posed by the low oxygen levels in the extreme high altitudes.

"When we started this research we thought this wolf is found only in the Himalayas, but now we know that they are found in the entire high altitude regions of Asia comprising the habitats of the Himalayas and the Tibetan Plateau.”

The study revealed a great deal about about Himalayan wolves' ecology, behaviour and diet. Researchers found through observing the wolves’ den sites that, in Nepal, Himalayan wolf pack sizes are smaller than usual grey wolf packs. The team also observed exclusive denning behaviour of Himalayan wolves and their pups.

Displacement of prey species in their habitat has left the wolves with little choice but to kill livestock, causing people to kill the wolves in retaliation as livestock is a major livelihood for many local communities.

This was identified as the main conservation threat to Himalayan wolves, along with selling their body parts in the burgeoning illegal wildlife trade.

The findings of this study will help to inform a number of conservation actions for the Himalayan wolf, including protecting wild prey populations and developing sustainable livestock herding practices in order to mitigate depredation conflict.

Findings can also be used as a data basis to formerly recognise the Himalayan wolf, giving it a Latin name which will then facilitate the process of assigning it an IUCN conservation status.