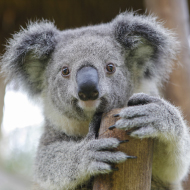 The recent bushfires affecting Australia have only increased the importance of protecting this vulnerable species.

Ongoing research into the affect of serious diseases on koala populations has revealed why koalas from different parts of Australia have higher incidences of disease than others.

Dr Rachael Tarlinton and Professor Richard Emes from the University of Nottingham’s School of Veterinary Medicine and Science have been working with researchers from the Universities of Queensland and Adelaide, assessing how a koala retrovirus called KoRV (which integrates into the koala genome) affects different koala populations across the country.

Diseases linked to KoRV, including leukemia and lymphoma, have contributed to the decline of koala populations in Queensland, whereas koalas in South Australia have a much lower incidence of disease. A study from this team last year found that the southern koalas do in fact have the KoRV virus but many are missing one or more KoRV genes.

The team has now been able to put numbers to the disease differences between koala populations across Australia, as well as the genetic reasons behind this.

Dr Tarlinton said: “This information is important for koala managers to be able to make good decisions about which animals are suitable for breeding and translocation programmes if they don’t know the actual impact of the health and genetic problems in different areas. Given the current bushfire crisis this is even more important that it was when we began this work several years ago.

“It’s about making sensible decisions. There will be a massive temptation to move animals between different areas right now to restock burnt forest but this may not be the best thing for the species as a whole if we introduce disease problems to areas where they weren’t before. The good news story for the southern populations is that they do indeed have a lower incidence of retroviral induced disease.”

The full study is available to read in Scientific Reports.