Cookie use on MRCVSonline
We use cookies to ensure that we give you the best experience on our website. If you continue without changing your settings, we will assume that you are happy to receive all cookies.
Accept Policy
Change cookie settings
New insights into the physical capabilities of aquatic animals 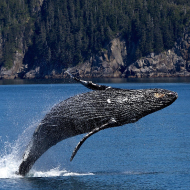 Humpback whales (pictured) and mackerals had a similar maximum speed when jumping out of the water.

New research led by the University of Roehampton has revealed fresh insights into the physical abilities of aquatic animals.

The study, published in the Journal of Experimental Biology, found that small fish like mackerel jump out of the sea (a behaviour known as ‘breaching’) at the same maximum speed as humpback whales. It also revealed that mullets can match apex predators such as the great white shark.

Study lead professor Lewis Halsey said: “There are general expectations that powerful animals known to hunt, such as orcas or great white sharks, would come out top in terms of maximum speed, but our results disprove this.

“We hope this will form the foundations for further research as we discover more about the maximum energy outputs of different animals and the underlying factors impacting this fundamental measure of an animal’s physical capacity and how they are adapted to their habitats.”

In the study, researchers examined video footage of 14 species of fish and cetaceans spanning in length from 20cm to 14cm. These included the African tetra, basking shark, common bottlenose dolphin and humpback whale.

They found that the maximum breaching speed of fish and cetaceans increases with size until it levels-off with species that are around two meters long. They also noted that the speeds of bigger cetaceans such as orcas and humpback whales do not surpass that of mackerel.

To put this into figures, both mackerels and humpback whales have a similar maximum speed when jumping out of the water (nine metres per second, m/s), and mullets and white sharks are also matched for breaching speed (six m/s), the researchers said.

The team also found that smaller fish delivered higher rates of energy output for their size. For example, the power of a mullet as it thrust through the water surface is about 40 Watts per kilogram of body weight - 10 times more power than shown by the great white shark.