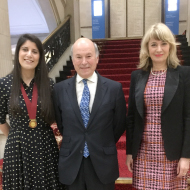 BVA warns of post-Brexit ‘surge in demand’ for vets

As the UK leaves the European Union, BVA president Daniella Dos Santos has called on the government to work with the veterinary profession to maintain workforce capacity and uphold animal welfare standards.

The call comes after Prime Minister Boris Johnson outlined new negotiating priorities that would mean animals and animal products exported from the UK into the EU single market will need veterinary certification and checks, whether or not the UK leaves with a deal.

Some members of the profession have also raised concerns about how the future immigration scheme will protect veterinary surgeons working in abattoirs, of which around 95 per cent come from outside the UK.

Speaking at BVA’s Annual London Dinner in Westminster (4 Feb), Ms Dos Santos said: “Only yesterday, the Prime Minister confirmed a set of negotiating priorities that would mean animals and animal products exported from the UK into the EU single market (and indeed from Great Britain into Northern Ireland) will need veterinary certification documents and checks whether we end up with a deal or a No Deal.

“This could spark a surge in demand on our members’ capacity, and really underlines the need for a multi-pronged and multi-stakeholder approach to ensure we have a flexible and future-proofed veterinary workforce for the years to come.”

Later in the speech, Ms Dos Santos welcomed efforts to increase veterinary school places and widen access to help boost levels of vets studying in the UK. However, she cautioned that these need to be matched with increased per capita funding:

“It’s estimated that the cost of equipping students with the skills they need to qualify is £20,000 per student, per year of study. The reality is that tuition fees and government funding don’t come close to matching these costs. And this gap will widen still further if funding levels stay static but need to be spread across higher numbers of students.

“If the government is truly committed to boosting workforce resilience and ensuring that we have the capacity we need in crucial areas after Brexit, I would urge ministers to look at how to fund our future vets, to give students from all backgrounds the best shot at a successful pathway to graduation.”

Ms Dos Santos also pressed for reassurance from the government that food produced to lower animal health and welfare standards will not be imported as part of any future trade deals.

“I can state very clearly that we as vets stand with you in pushing for assurances that imports produced to lower animal health and welfare standards will not be accepted as part of future trade deals,” she said.

“The media is obsessed with chlorine-washed chicken and it certainly makes a good headline. But we mustn’t allow it to distract from the grim realities about the animal welfare compromises that could be imported to the UK. I hope that tonight we can all agree that our reputation relies on not allowing animal health and welfare to be compromised at any cost.”