Cookie use on MRCVSonline
We use cookies to ensure that we give you the best experience on our website. If you continue without changing your settings, we will assume that you are happy to receive all cookies.
Accept Policy
Change cookie settings
Lame sheep adjust their behaviour to reduce discomfort, study finds 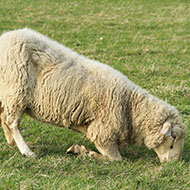 Best practice for lameness relies on fast treatment, but currently no validated commercial tools exist to help with diagnosis.

A study from the University of Nottingham’s School of Veterinary Medicine and Science has shown that lame sheep will adjust how they carry out certain activities, such as walking, standing or lying down, rather than reducing the amount of activity.

The study used a new prototype tagging and monitoring system, developed by Dr Jasmeet Kaler, associate professor in epidemiology and farm animal health, along with companies Intel and Farm Wizard. The technology is worn on a sheep’s ear tag and gathers accelerometer and gyroscope data to track the animal’s behaviour and movement.

Detecting lameness has previously been difficult as it relies on visual inspection. Researchers were not only able to detect the features of lameness using the new technology, they also identified behaviours which are far more difficult to spot with the human eye.

When walking, the main characteristics of lameness were frequency, linked to rhythm and pace, researchers say this could be the result of reduced mobility in lame sheep, leading to changes in acceleration and rotational movement.

There was also a change in the gait of lame sheep, with ‘peculiar head nodding’ in line with their stride, compared to smoother stride patterns in non-lame sheep.

According to the report, the results for classification of lameness had a higher accuracy within lying and standing activities.

The most notable features include a mixture of frequency and time-domain features, suggesting differences in the variability and smoothness of movements for both standing and lying down between lame and non-lame sheep that may be attempting to alleviate pain caused by the lameness.

Commenting on the results of the study, Dr Kaler said: “This has been the first report of its kind and given lameness classification is possible within all these activities this helps to improve the accuracy as well as flexibility in terms of energy requirements. This automated system for the lameness detection can help improve sheep health and welfare on farms.”