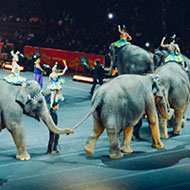 "The vote was great news for animals - with the spectre of wild animals in travelling circuses one steop closer to being resigned to Wales' history books" - Dr Ross Clubb, RSPCA.

Legislation would end use of wild animals in travelling circuses

Members of the National Assembly for Wales have voted unanimously in favour of a law that will ban the use of wild animals in travelling circuses in the country.

The vote took place in Welsh Parliament on Tuesday (7 January), with all members of the Senedd voting in its favour. RSPCA Cymru, which has long backed the campaign, said the vote brings a ban on the out-dated practice 'one step closer'.

Dr Ros Clubb, RSPCA senior scientific manager specialising in captive wild animals, said: "This vote was great news for animals - with the spectre of wild animals in travelling circuses one step closer to being consigned to Wales' history books.

"The transient nature of these circuses make things so difficult for the animals. Forced training, unsuitable accommodation, difficult journeys and unnatural social groupings all likely compromise their welfare and are a source of stress.”

The RSPCA’s call to further improve legislation - and free wild animals from confinement and forced training - received the support of politicians from across the political sphere. The MPs highlighted the need to remove potential loopholes, tighten enforcement provisions and bringing the law into force sooner.

"We're so grateful to everyone who has backed the RSPCA's long-standing campaign on this issue. It will make such a powerful statement when this out-dated practice is finally brought to an end in Wales,” Dr Clubb continued.

"It was also great to see politicians from across the political spectrum highlight RSPCA suggestions to further improve this important law. We look forward to continuing to work with the Welsh Government and Members of the Senedd to ensure this ban is as effective as possible and comes into force as soon as possible."

Vetpol recognised as suitable body to maintain register of SQPs

Online community Vetpol has been recognised by the Veterinary Medicines Directorate (VMD) as a suitable organisation to maintain a register for suitably qualified persons (SQPs).

SQPs are professionally qualified to prescribe and supply veterinary medicines classified as POM-VPS and NFA-VPS – such as flea and worming treatments – as well as advise on their safe and effective use.

Vetpol is now the third body approved to maintain a register of SQPs, along with Animal Medicines Training Regulatory Authority (AMTRA) and VetSkill.

Recognition from the VMD means that Vetpol has successfully demonstrated its ability to fulfil the requirements of the Veterinary Medicines Regulations.