Cookie use on MRCVSonline
We use cookies to ensure that we give you the best experience on our website. If you continue without changing your settings, we will assume that you are happy to receive all cookies.
Accept Policy
Change cookie settings
Oregano oil can reduce antimicrobial resistance in calves - study 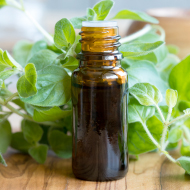 Scientists found that adding oregano oil to a calf's diet can significantly reduce levels of E.coli bacteria that are resistant to a fourth-generation cephalosporin antibiotic.

Oregano essential oil can reduce antimicrobial resistance in calves, according to a trial conducted by the University of Reading.

Scientists found that adding oregano oil to a calf’s diet can significantly reduce levels of E.coli bacteria that are resistant to a fourth-generation cephalosporin antibiotic.

They have described the results as “very promising, offering a potential solution in helping to reduce the presence of antimicrobial-resistant bacteria.”

In the trial, researchers fed waste milk containing Orego-Stim - a 100 per cent natural source of oregano essential oil - to dairy calves. They then measured the population of antimicrobial-resistant bacteria in the calves’ faeces.

The team fed Holstein male calves either waste milk containing Orego-Stim for ten days, or a control diet of the same waste milk, without the addition of the oregano oil. After 10 days, all of the calves were fed the same quantity of untreated waste milk and concentrates until weaning.

Author Dr Partha Ray, a lecturer in dairy animal science, said: “Oregano essential oil supplementation not only reduced the abundance of cefquinome-resistant E. coli but also delayed the emergence of resistance to cefquinome.”

“We are conducting further studies to understand the mechanism underlying the effect of Orego-Stim feeding on antimicrobial resistance in the gut of young cattle. Improving our understanding of the mechanism is the only way we can refine the practice of feeding the essential oil-based supplement to make it more sustainable.”

Co-author Dr Caroline Rymer, associate professor of animal science, added: “Feeding supplements which have antimicrobial activity may themselves encourage the development of antimicrobial resistance. It was therefore very pleasing that there was no evidence that feeding Orego-Stim increased the resistance of E. coli to any of the antibiotic classes tested.

“It was even more promising that resistance to the critically important cefquinome was reduced”.