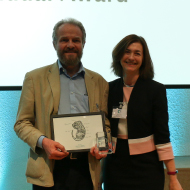 Professor Wells recieved the honour at the annual Openess Awards in London.

RVC Professor Dominic Wells has been presented with a prestigious award for ‘outstanding contribution to openness in animal research’.

Professor Wells received the honour at the annual Openness Awards in London on Tuesday (3 December), hosted by Understanding Animal Research (UAR). The “UAR Individual Award” was given to Dominic Wells in recognition of his ‘outstanding’ work within the sector to promote the responsible use of animals.

Professor Wells said: “I am absolutely delighted to have received this award from Understanding Animal Research and am grateful for the support I have received from the RVC. My contribution to the sector stems from a true passion for animal research and it is an honour to be recognised in this way.”

Professor Wells was nominated for his numerous contributions to the UAR, including regular discussions with the media, MPs and other stakeholders on the use of animals in research. His nominators also praised his roles as chair of the Animal Sciences Group at the Royal Society of Biology, and co-chair of the UK Bioscience Sector Coalition.

The UAR Openness Awards celebrate the achievements of the sector in honouring their commitment to the Concordat on Openness on Animal Research. The awards seek to recognise those who have championed openness on animal research over the years and continue to do so.

This year, the UAR Individual Award was also presented to Val Summers from the Laboratory Animal Science Association. In a Tweet, Understanding Animal Research praised Ms Summers ‘for going ‘above and beyond in her work, ensuring that public and media engagement around #animalresearch is at the top of the agenda.’