Cookie use on MRCVSonline
We use cookies to ensure that we give you the best experience on our website. If you continue without changing your settings, we will assume that you are happy to receive all cookies.
Accept Policy
Change cookie settings
Call for review of how behaviours spread in animals 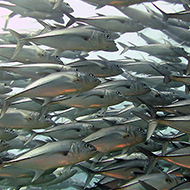 Fish appear to make fine-scale judgements about when to copy their shoal-mates’ behaviour.

Scientists at Oxford University are calling for a review of how behaviours spread through wild animal populations and how this could aid in the understanding of human social connections.

Their study, published in Trends in Ecology & Evolution, suggests that understanding of animal behaviours could be improved by drawing on the latest discoveries in human social systems.

The human studies revealed that while people in close-knit groups had fewer social connections, they were very influential and promoted the spread of new behaviour.

In the new study, researchers show how these recent insights can be used to enrich our understanding of animal social networks.

Examples presented in the paper reveal how, even in the most basic social systems, small changes can have a major influence on which animals might adopt a behaviour and which might be key to its spread.

“Just like in humans, various animal species are known to be capable of social considerations, such as when to adopt a behaviour, or who to learn from,” explained lead author Dr Josh Firth. “These choices mean that behaviours don’t spread like diseases.”

The researchers also draw on recent studies of animals' social connections and how this could inform understanding of human social lives. For example, birds may ‘follow the majority’ when learning to find food and fish appear to make fine-scale judgements about when to copy their shoal-mates’ behaviour.

Scientists suggest that by considering how these choices affect the spread of behaviour, animal systems could reveal new insights into the spread of different behaviours (such as mating or foraging), and which factors govern which individuals have the most influence on their peers.

RCVS Knowledge, the charity partner of the Royal College of Veterinary Surgeons (RCVS), has published a page of COVID-19 coronavirus resources for veterinary professionals across the industry.

The resource, which can be found here, includes veterinary advice, updates, research and evidence regarding the virus. The advice encompasses information to help veterinary professionals respond to questions from their clients and the BCVA's latest guidance for farm animal vets.

Veterinary professionals are urged to share the resource on social media and let RCVS Knowledge know of any additions.

Senior vice president of the BVA Dr Simon Doherty has been appointed as chair of the Food Safety & Sustainability working group of the Federation of Veterinarians in Europe (FVE).

Dr Doherty has 20 years' experience in farm animal and equine veterinary practice, industry and academia. He has been working as a senior lecturer at the Queen's University Belfast Institute for Global Food Security since 2018 and is a trustee of Send a Cow and the Animal Welfare Foundation.

The Food Safety & Sustainability working group will support FVE in all matters related to food safety, food security and sustainable livestock systems. It will also assist FVE in taking the most effective policies at EU level.