Cookie use on MRCVSonline
We use cookies to ensure that we give you the best experience on our website. If you continue without changing your settings, we will assume that you are happy to receive all cookies.
Accept Policy
Change cookie settings
Kennel Club approves new DNA testing scheme for pugs 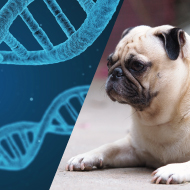 A new official DNA testing scheme for pug dog encephalitis (PDE) has been approved by The Kennel Club following consultation with the pug breed health coordinator on behalf of the breed clubs.

PDE is an inflammatory brain disease that is typically progressive and fatal. Signs that a dog is developing the condition can include seizures, blindness and not walking correctly.

PDE is considered a priority condition and The Kennel Club, breeders and breed clubs are eagerly working towards eventually eradicating the disease from the breed.

As opposed to providing a definitive result, the test for PDE evaluates the risk level a dog has of developing the condition, therefore results are recorded for individual dogs only and progeny cannot be assigned as ‘hereditarily clear’. Dogs that have been tested will be recorded on the Kennel Club system as either:

Only dogs with two copies of the gene variant have an increased risk of developing the disease, and only an estimated one in eight of these dogs will actually ever be affected.

Gary Johnson, breeder services manager at The Kennel Club, said: “The Kennel Club constantly reviews DNA testing schemes in conjunction with breed clubs to ensure that breeders are supported with resources which help them to make responsible breeding decisions.

"DNA technology is making huge advances year upon year. It is very good news that pug breeders are taking advantage of this technology which will be of huge benefit as breeders work towards eradicating this condition from this popular and loving breed.”