MRCVSonline cannot control these cookies from outside sources and we advise you to check with the relevant third party for more information..
Childhood pets ‘increase ability to cope with adulthood stress’ 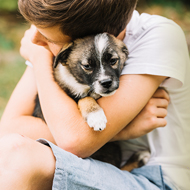 Owning a pet during childhood can help increase ability to cope with stressful situations in adulthood, according to new research.

More than 2,000 people responded to the survey, which aimed to find out how companion animals can improve wellbeing. Of these, 98 per cent said that, despite the care needed, they wouldn’t be more stressed by having a pet during times of difficulty.

Around half of the respondents (52 per cent) agreed that pets helped lift their mood during times of distress and upset. One in five pet owners (20 per cent) said they would be most likely to turn to their pets for comfort.

NOAH Chief Executive Dawn Howard comments: “Mental health has a huge impact on the quality of our lives. Stress is a part of this: it is a normal part of life, yet at times we may become overwhelmed and our mental health can suffer.

“It’s reassuring to see the importance that pets play in helping us through difficult times. Our new research shines a light on how companion animals can help our wellbeing. There is no denying that pets have a hugely positive impact on people – more than two-fifths of the population (45 per cent) even said that pets fill a space in a family that they didn’t know they had!”

The survey also revealed that the positive impact of pets on mental health is strongly supported. Almost two in five UK adults said that having a pet gave them confidence.

Some 67 per cent of respondents also said that having a pet provides companionship and friendship.