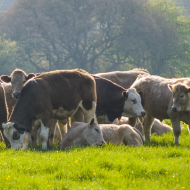 The BCVA will continue to maintain its close relationship with Defra

In a statement the British Cattle Veterinary Association has announced: ‘The BCVA remains supportive of the overarching goals of the 25-year bTB control strategy launched by Minister George Eustice MP in 2014.

'We see opportunities to utilise an increase in available science, as well as a perceived invigoration – in both vets and farmers – to take control of their destiny with bTB in order to maintain and improve the gains already being made.

‘The BCVA will continue to maintain our close relationship with Defra, to minimise the political interference with disease control. Instead, we advocate an approach of farm level control, delivered by trusted practitioners, supported by government, which enables all available tools to be at the disposal of this vet-led team.

‘With this open and inclusive approach, we believe that the achievement of the status of freedom from bTB by 2038 is an ultimate achievable goal.’

‘In any policy as complex and nuanced as Bovine Tuberculosis (bTB) it will necessarily extend beyond the scope of a short comment. This commentary should therefore be taken alongside the document developed by the British Cattle Veterinary Association (BCVA) TB group and to be released shortly.’