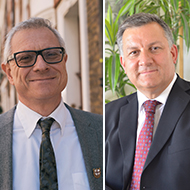 The Disciplinary Committee conducts the RCVS disciplinary hearings, tribunals where charges are heard against a veterinary surgeon alleging that he or she is guilty of serious professional misconduct – the wording of the Veterinary Surgeons Act 1966 is ‘disgraceful conduct in a professional respect’ – or that he or she is unfit to practise because of a criminal conviction.

Ian Arundale has now been appointed its new Chair following an application process from within existing DC members, with the final interview panel consisting of Amanda Boag (president at the time), Ian Green (current DC Chair) and Miran Uddin (an independent barrister who works in regulatory law). He begins his role in late October.

Ian is deputy chief constable of Cleveland Police and was a police officer for 32 years serving in South Wales, West Mercia and Dyfed-Powys police forces. He currently provides expert witness services to inquests, courts and public inquiries. He has worked internationally and has assisted police forces and organisations in the USA, India, the Far East and New Zealand. In addition to his work with the RCVS, Ian is also the chairperson of the Audit Committee for the City of Cardiff Council and is a board member of the International Law Enforcement Forum.

The PIC is a statutory committee tasked with investigating concerns made to the RCVS in which there is an arguable case for serious professional misconduct.

The Committee meets every fortnight to decide if there is a realistic prospect that the conduct of the veterinary surgeon in cases before them will be found to have fallen far below the standard expected and should be referred to the Disciplinary Committee, or whether they should be handled in an alternative way.

Dr Bradley Viner has been appointed as the new Chair of the RCVS PIC and began his role on 1 July 2019. He was appointed through an independent selection process led by an external HR consultancy, with RCVS Council ratifying the final appointments. He replaces Andrew Ash, who chaired the PIC from July 2015 up until Bradley’s appointment.

Bradley established his own small animal practice in Pinner, Middlesex, which then grew to a group of five practices in north-west London. In 2017 he sold his practices to the Linnaeus Group and now works for them as Group Clinical Quality Lead across all their sites.

He was made a Fellow of the Royal College of Veterinary Surgeons in 2017 for Meritorious Contributions to Clinical Practice. Bradley was an elected member of RCVS Council between 2005 and 2017, including four years as RCVS treasurer and one year as RCVS president in 2015-16.