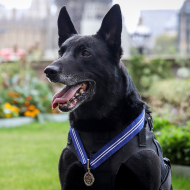 Hurricane received the PDSA Order of Merit at a special ceremony at the House of Lords.

A US Secret Service dog who foiled a serious security breach at the White House has been awarded the PDSA Order of Merit.

In October 2014, Hurricane and Marshall were on duty at the White House when a man vaulted the fence and sprinted across the lawn, towards where President Obama and his family were in residence. It is the job of the Secret Service to prevent any threat to the President, so the canine team leapt into action.

The team's first attempt to thwart the intruder was unsuccessful, but fortunately, Hurricane and Mirarchi were on standby. On Mirarchi’s command, Hurricane bounded across the grass making contact with the intruder, intending to push him back into the perimeter fence. In the ensuing struggle, however, Hurricane was kicked, punched and swung through the air.

Despite this violent, repeated attack, Hurricane kept his jaw gripped on the intruder’s arm and never gave up. He continued to push forward and finally grounded the man, enabling armed officers to take him into custody.

Now retired from service, Hurricane flew to the UK from Washington in VIP-style courtesy of British Airways. The special ceremony took place at the House of Lords and saw Hurricane become the first international recipient of the PDSA Order of Merit.

Maria Goodavage, who first met Hurricane and Marshall when she was researching her book on secret service dogs, said: “When I heard what happened that night and how impeccably Hurricane behaved, I was absolutely blown away. The skill and talent of these dog teams is second to none and I am completely thrilled to be here to see Hurricane honoured with the PDSA Order of Merit.”

Officer Marshall Mirarchi added: “Hurricane was such a legend within the Service. He loved working and his talent for the job impressed me every single day. That night, he stepped up and delivered under circumstances that no amount of training could prepare him for. I have never witnessed such violence toward a dog before but it didn’t stop him from doing his job.

“I am so proud of him and extremely thankful to PDSA for honouring his service and actions in this way. We are very pleased to be in London to receive the honour – Hurricane has travelled in style with British Airways and is receiving the full VIP treatment, just as he deserves.”