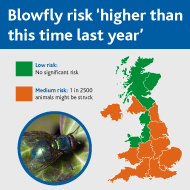 Ongoing collaboration between Elanco and NADIS (National Animal Disease Information Service) show the blowfly strike risk level as ‘medium’ across most of the country, with only a couple of areas downgraded to ‘low’.

However, blowfly strike still remains a very real threat – temperatures remain high and many preventive medicines applied in the summer will no longer be protecting the animals.

Reports of blowfly cases continue to be added to the Blowfly Strike Tracker from across the country.

Richard Wall, professor of zoology and compiler of the Blowfly Risk Alerts, says: "The warm and wet autumn is keeping the strike risk higher than this time last year. Blowflies need temperatures of above 12°C to be able to lay eggs, so while the current weather persists, the threat from strike will remain real.

“Farmers therefore need to maintain vigilance, particularly since most treatments applied in summer will not still be protecting animals at this stage of the season."

The current regional alert breakdown is as follows:

“When farmers are looking at treatment options, they need to look the longest protection with an IGR that binds to the fleece. It is now possible to get 19 weeks blowfly strike prevention,” says independent sheep veterinary consultant, Dr Fiona Lovatt. “The costs of inaction when it comes to blowfly strike far outweigh the costs of protection – the time to act is now.”

Results of an Elanco blowfly study conducted in partnership with the National Farm Research Unit found that 99 per cent of farmers have suffered financial losses as a result of blowfly strike. While 82 per cent agree that the blowfly season is getting longer, with cases of strike being reported as early as February and as late as November.

The consequences of blowfly strike can be devastating, leading to production losses and welfare problems. By comparison, preventing blowfly strike using a long-lasting product can offer not only peace of mind but can also be economical in terms of time, money and effort.