MRCVSonline cannot control these cookies from outside sources and we advise you to check with the relevant third party for more information..
Labour launches progressive Animal Welfare Manifesto 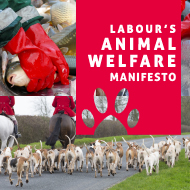 The Labour Party has launched a 50-point Animal Welfare Manifesto, laying out a suite of progressive measures to improve welfare for pets, wildlife, livestock and animals used in sport and research.

One of the party’s key pledges if elected, is to enshrine animal sentience in law, extending the definition of ‘animal’ to cover decapod crustaceans and cephalopods - which would ban the practice of boiling lobsters alive.

It would also extend the five-year maximum jail sentence for animal cruelty to cover wild animals, as well as pets.

An independent animal welfare commissioner would also be appointed to ensure welfare standards are always considered when new legislation is introduced.

Other key pledges include:

The party also pledged to review the practice of driven grouse shooting and tackle illegal hare coursing and persecution of birds of prey. In addition, it said it will ban imports of fur, wild animal trophies and foie gras.

Commenting on the manifesto, Defra shadow secretary Sue Hayman MP said: “This suite of policies on animal welfare seeks to build upon the long standing leadership of the Labour Party on the issue of animal welfare…

“Labour will ensure that we have a comprehensive legislative agenda in place to make sure that the UK has animal rights protections equal to or better than anywhere in the world.”

President Simon Doherty said: “There is considerable and long-standing professional and public feeling behind the campaign to enshrine sentience, which makes it all the more disappointing that it still hasn’t been given the go-ahead despite government assurances that they are committed to the legislation and underpinning principles.

"Parliamentary time may be tighter than ever before, but there is a golden opportunity here to make the UK’s status as a global leader on animal welfare resoundingly clear.”

Meanwhile pet charities such as Cats Protection and Battersea Dogs and Cats Home welcomed promises to introduce compulsory microchipping for cats, as well as measures to make it easier for pet owners to find pet-friendly accommodation.