MRCVSonline cannot control these cookies from outside sources and we advise you to check with the relevant third party for more information..
Pet bereavement leave petition gains more than 9,000 signatures 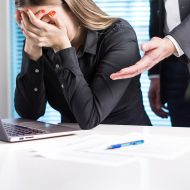