Cookie use on MRCVSonline
We use cookies to ensure that we give you the best experience on our website. If you continue without changing your settings, we will assume that you are happy to receive all cookies.
Accept Policy
Change cookie settings
RSPCA warns of collapse of farming standards in no-deal Brexit 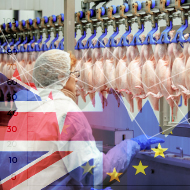 Animal welfare standards in the UK are currently far higher than many non-EU countries.

The RSPCA has warned against the deregulation of farm animal welfare standards in the event of a no-deal Brexit.

The warning comes after the president of the National Farmers’ Union (NFU) said that to compete with cheap, low-quality animal products which could pour into Britain in a no-deal Brexit, the Government’s only option will be to deregulate the industry.

UK animal welfare standards are currently far higher than many non-EU countries with which it is seeking trade deals. The USA, for example, still administers growth hormones to its cows and washes chicken in chlorine.

It says that in the increasingly likely scenario of a no-deal Brexit, the UK would be under pressure to accept farm products produced which are lower or even illegal for British producers. The only way to compete with the influx of cheaper chicken, the NFU president has said, is to deregulate the industry.

“Chlorinated chicken and hormone-fed beef on our supermarket shelves is now much closer to being a terrifying reality,” said RSPCA head of public affairs David Bowles.

“We have always said that a no-deal Brexit could result in a race to the bottom in terms of animal welfare standards and, worryingly, the Government’s promise to maintain those standards sounds increasingly hollow. If the farming industry does deregulate because of a no-deal Brexit, food products which are currently banned from being sold anywhere in the EU due to the unacceptable method of their production will be allowed to be sold in the UK.”

He continued: “Eight out of 10 people believe that animal welfare laws in the UK should be improved or at least kept at the same level after the UK leaves the EU. If the Government is serious about ensuring the long-term survival of the UK’s farming industry, the UK should be building on its reputation for gold standard farm animal welfare.

“Scrapping farm animal welfare regulations and lowering welfare standards cannot and must not be the answer.”

The RSPCA is calling on the Government to plan for long-term sustainability. This means maintaining and strengthening regulation, ensuring the viability of high welfare schemes and building consumer demand by extending the method of product labelling.

The animal welfare charity would also like to see the commitment to protecting the UK’s domestic animal welfare standards enshrined in law under the Agriculture and Trade Bills and all current animal welfare laws, at the very least, to be kept to the same standard.