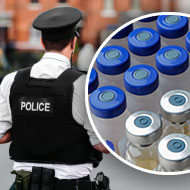 "The items that were taken are intended for livestock only and could potentially be fatal if consumed by humans." (Stock photo)

Thieves stole a quantity of medications for livestock

Police have issued a warning after a number of veterinary medicines for livestock were stolen from a veterinary centre in Wales.

Among the items taken were vials of ketamine, diazepam, morphine, Somulose, Atropine and adrenaline. The drugs are intended for livestock and could be potentially fatal if consumed by humans.

The break-in occurred at a practice in Llanymynech at around 5am on Saturday (3 August).

Inspector Nigel Morgan, of West Mercia Police, said: "We are urging members of the public to be vigilant following the burglary this morning. The items that were taken are intended for livestock only and could potentially be fatal if consumed by humans.

"Our local Safer Neighbourhood Team will be patrolling in the area but we would advise anyone who comes across the vials or any boxes of medication to hand them in to their local police station immediately where they can safely be destroyed.”

Anyone with information on the theft should call 101 quoting incident 158S of 3 August.