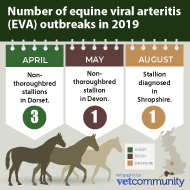 “These findings remind us that we must all be vigilant for signs of disease and how essential it is to following strict biosecurity measures.”

Outbreak thought to be ‘unrelated’ to Devon and Dorset cases

A new case of equine viral arteritis (EVA) has been confirmed in a non-thoroughbred stallion at a premises in Shropshire, the APHA has revealed.

Investigations into the source and spread of the disease are ongoing, but the case is currently thought to be unrelated to the outbreaks in Devon and Dorset earlier this year.

Breeding and movement restrictions have been placed on the animal and will remain in force until the risk has been mitigated. The owner of the horse has said they intend to have the stallion castrated, which will prevent further disease spread.

Deputy chief veterinary officer Graeme Cooke said: “We are taking action to limit the risk of the disease spreading by placing breeding and movement restrictions on the animal. A full investigation is continuing to consider the source and possible spread of the infection. Owners of mares and stallions are always urged as a routine to have their horses tested before they are used for breeding.

“These findings remind us that we must all be vigilant for signs of disease and how essential it is to following strict biosecurity measures.”

EVA is a notifiable disease in all stallions, and in mares that have been mated or inseminated in the past 14 days. Suspected cases must be reported to APHA immediately by calling the Defra Rural Services Helpline on 03000 200 301.