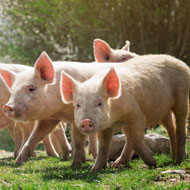 The rapid spread of ASF through Europe and China has decimated pig populations.

Researchers screened proteins to find out which ones activated immune cells in pigs that had previously been infected with a weakened form of ASFV.

The 18 proteins that created the strongest immune cell response were transferred into viral vectors, which deliver the ASF proteins to pig cells without harming the animal.

Findings published in Frontiers in Immunology found that when some pigs were given a virulent strain of ASF, after receiving a vaccine that included the newly identified proteins, the level of ASF in the blood was reduced.

The rapid spread of ASF through Europe and China has decimated pig populations, resulting in the culling of more than 1.1 million pigs in China and nearly 2.5 million in Vietnam. Currently, culling, quarantine and strict biosecurity measures are the only defences farmers can use to prevent the virus spreading.

Various types of vaccine are being developed, but little is known about the virus and how the immune system responds to it.

Vaccines made with inactivated viruses have not offered protection to domestic pigs, and while live attenuated vaccines show promise, more testing is needed to ensure their safety. Pirbright researchers hope these vector vaccines offer an alternative option.

Dr Chris Netherton, head of Pirbright’s ASF Vaccinology Group said: “ASFV has more than 150 proteins; understanding which of these triggers an immune response is difficult but crucial for creating this kind of vaccine.

"Now we have identified proteins that activate pig immune cells, we can work on optimising the vaccine components to ensure pigs are protected against virulent ASF strains.”