MRCVSonline cannot control these cookies from outside sources and we advise you to check with the relevant third party for more information..
Vets urged to be aware of the signs of animal abuse 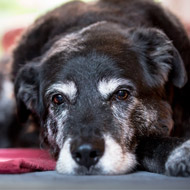 ‘Veterinarians must be alert to recognise signs of animal abuse' - Ira Roth.

Veterinary professionals are being urged to be aware of the signs of animal abuse and to understand the link between human and animal abuse.

Writing in the Journal of the American Animal Hospital Association, vets from the University of Georgia’s College of Veterinary Medicine describe a case of animal abuse, which was first diagnosed as Legg-Calve-Perthes disease.

On initial presentation, a dog - a one-year-old male shitzu - was non-weight bearing in the right limb. An ophthalmic exam also revealed a corneal ulcer in the right eye and blood in the anterior chamber.

Radiographs of the right limb indicated avascular necrosis (AVN) on the right hip, with resilient fracture and possible AVN on the left side.

‘The dog's initial injuries were attributed to a routine fall at home, and radiographic interpretation suggested that this was plausible,’ writes author Ira Roth, a clinical assistant professor in the department of small animal medicine and surgery.