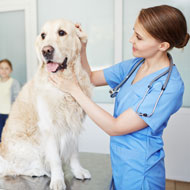 "I see the delivery of outstanding health care delivered by independent vets and I see them delivering that in a very affordable fashion". (Stock photo)

XLVets CEO says the future is bright for independents

The chief executive of XLVets, Andrew Curwen, has said he is “very confident” about the future of independent veterinary practice, during a BBC programme on the changing landscape of veterinary ownership.

There are currently 1,800 veterinary practices in the UK, which comprise around 5,500 individual surgeries. Figures show that two years ago, about a third of these were corporate, but today, that proportion has risen to more than half.

Predictions suggest three quarters of practices could be taken over by corporates in another two years if the trend continues. However, Vet Record editor Adele Waters told the BBC You and Yours programme that the industry is seeing a “slow down” in acquisitions.

Mr Curwen commented: “The veterinary profession has historically been very adept at dealing with change. I see the delivery of outstanding health care delivered by independent vets and I see them delivering that in a very affordable fashion, without needing to be distracted by servicing the needs of third party shareholders, or people who have lent large amounts of money in buying the practice.

“So I’m very confident about the future of independent veterinary health care and I think it would be great for consumers to have the clarity as to who owns their practice now.”

Adele Waters said the acquisition of practices has been “very competitive” and has been likened to a “feeding frenzy” with partners selling to the highest bidder.

She explained: “It takes years to get that money back. But I think now shareholders are concerned that it’s taking too long. And so now we are seeing a slow down in acquisition.

“I think independent practices are actually are feeling more buoyant than they were a year ago.”

Jacqui Garrett, chair of membership services at the Federation of Independent Veterinary Practices (FIVP), commented: “The independent practices we work with report benefits such as autonomy over decision-making, less focus on profit and the ability to offer a more bespoke service to clients, that is responsive to local conditions.

“In our members’ practices, ownership and decision-making is led by vets who work in the practice. Staff members also feel reassured by the stability offered by a practice that is ‘not for sale’.”

FIVP represents the interests of and promotes the values of independent practices, offering its members a range of benefits, in addition to acting as a voice for independents on key issues in the industry.

According to the BBC programme, a number of corporate organisations were invited to take part in the discussion, but declined.