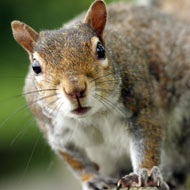 Wldlife groups say they will be left with no choice but to discriminate and euthanise unnecessarily.

New rules around releasing invasive non-native species and grey squirrels are set to come into effect in October 2019, the government has confirmed.

The plans have been met with criticism from wildlife organisations and animal charities, with some saying it will lead to the unnecessary killing of animals.

Under the Invasive Alien Species (Enforcement and Permitting) Order 2019, rescue centres and vets will be prevented from releasing grey squirrels back into the wild in order to protect the endangered red squirrel.

The government says there will be no requirement for vets to euthanise injured or healthy squirrels. But wildlife groups say they will be left with no choice but to discriminate and euthanise needlessly.

The Wildlife Aid Foundation said the proposed order will cause unnecessary suffering to wildlife and force the practice of animal rescue underground. It added that well-meaning members of the public will try to look after the animals ‘in circumstances that will do more harm than good'.

Wildlife Aid Foundation CEO Simon Cowell said: “The proposed regulation sends the wrong message to a public which is more engaged and concerned about the state of the natural world than ever."

The RSPCA has also expressed concern about what it calls the ‘unnecessary destruction” of non-native species. A spokesperson for the charity told the East Anglian Daily Times:

“While we support some aspects of this legislation as it prohibits the trade in, and keeping of species like racoons, racoon dogs and coyotes, it will also result in the removal of licences in England that currently allow the release of rehabilitated grey squirrels and muntjac.

“This will mean the unnecessary destruction of animals which could otherwise have been rehabilitated and returned to the wild. The proposed new law will make little or no difference to the wider population of grey squirrels or muntjacs, nor will it alter the impact of these species in the wild.”

It has been illegal to import and keep squirrels under existing British legislation since 1937. This will remain under the Invasive Alien Species Order in line with EU regulation on invasive species and domestic policy.

It is also an offence under the Wildlife and Countryside Act 1981 to release grey squirrels without a licence. The order will mean that Natural England will no longer issue release licences for grey squirrels.

Biosecurity Minister Lord Gardiner said: “Invasive non-native species, including the grey squirrel, not only challenge the survival of our rarest species but damage some of our most sensitive ecosystems, costing the economy more than £1.7 billion per year.

“This order prevents the release of these animals back into the wild to help protect the endangered red squirrel, with only 15,000 left in England. There is no requirement for vets to euthanise injured or healthy squirrels as a result of this order.”

The move will bring England in line with Wales, Scotland and Northern Ireland, where release licences are not issued.

There will be an upcoming consultation on the proposed management measures during which keeping and release licences will be extended until the order comes into force.