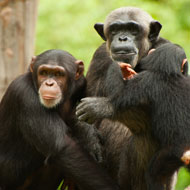 Up to 1,500 Western chimpanzees could die as a result of the project

Experts have criticised plans to build a hydroelectric dam in the Moyen-Bafing National Park, Guinea, warning that it could have a detrimental effect on the chimpanzees that live there.

Moyen-Bafing is home to 16,500 Western chimpanzees. The species is reported to have declined by 80 per cent in the past decade and is listed as critically endangered on the IUCN Red List.

Last week Chinese firm Sinohydro signed a contract to build a new dam inside the park. The Guardian reports that local representatives were keen to secure a project that would bring energy and funds to one of Africa’s poorest countries.

But primatologist Rebecca Kormos said that up to 1,500 chimpanzees could die as a consequence of the project, either by having their territory flooded or because of territorial conflicts if they attempt to move.

“I hope Sinohydro will reconsider engaging in a project that could drive the western chimpanzee into extinction. Once a species goes, it’s gone forever,” she said.

The Guardian reports that the nature reserve was created in 2016 intended as a “chimpanzee offset” funded by two mining companies and the World Bank. But while the plan for the dam is popular in Guinea, locals are said to be unaware that the energy created will not go to them.

"This is not a case of the international community outting chimpanzees before before people," Kormos continued. "Three-quarters of the energy will be sold to neighbouring countries and the remaining quarter is for the mining industry."

Since the project was launched, some 140,000 people have signed a petition calling on the government of Guinea to stop its construction.