MRCVSonline cannot control these cookies from outside sources and we advise you to check with the relevant third party for more information..
Genetically-modified chickens offer hope for cheaper drugs 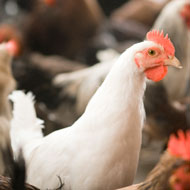 Chickens could be used as a cheaper method for producing high-quality research drugs.

Researchers at the University of Edinburgh’s Roslin Institute have genetically-modified chickens to produce human proteins in their eggs.

It is hoped the method could one day offer a cost-effective solution for producing certain drugs, including therapies for treating cancer.

The team found that high quantities of the proteins needed for the drugs could be recovered from each egg using a purification system. The drugs they recovered worked as well as if the same proteins were produced using existing methods.

Their findings suggest that chickens could be used as a cheaper method for producing high-quality research drugs. Looking ahead it is also hoped that the drugs could be used in patients.

The team set out to produce high-quality proteins for use in scientific research. They did not witness any adverse effects on the chickens themselves, which continued to lay eggs as normal.

Scientists already use eggs to produce vaccinations, such as the influenza vaccine. But the new method differs because the proteins are produced as part of the egg white.

In this study, three eggs were enough to develop a dose of the drug that is clinically relevant. With chickens laying up to around 300 eggs per year, researchers say the approach could be more cost-effective than current methods.

The two proteins the team have been focusing on are IFNalpha2a, which has powerful anti-cancer and anti-inflammatory effects, and macrophage-CSF, which can stimulate the repair of damaged tissues.

Professor Helen Sang of the Roslin Institute said: “We are not yet producing medicines for people, but this study shows that chickens are commercially viable for producing proteins suitable for drug discovery studies and other applications in biotechnology.”

Dr Lissa Herron, head of the Avian Biopharming Business Institute at Roslin Technologies, added: “We are excited to develop this technology to its full potential, not just for human therapies in the future but also in the fields of research and animal health.”

The findings are published in the journal BMC Biotechnology.