MRCVSonline cannot control these cookies from outside sources and we advise you to check with the relevant third party for more information..
High car boots may increase dog injury risk 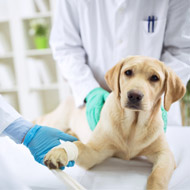 Allowing dogs to jump out of high car boots may increase their risk of injury.

Allowing dogs to jump out of big cars with high boots may put undue pressure on their front legs and increase their risk of injury, according to new research.

Although dog owners are required by UK law to restrain their animal when travelling in a vehicle, no legislation exists for safe entry and exit from a car boot or back seat.

To see if different car boot heights are linked to excess pressure loading, researchers organised an experiment where 15 healthy dogs jumped three times. Each jump was from a platform set to a different boot height: 0.55, 0.65 and 0.75 meters.

The team measured the forces involved for each of these jumps and found that the pressure on the dog’s front legs rose significantly as the ‘boot’ height increased. Between the 0.55 and 0.65 metre heights, the pressure increased by just under 13 per cent. With a further 10cm rise in height, this pressure rose by 11 per cent.

The researchers stress that further research is required to investigate the link between this type of pressure and the type of front leg injuries commonly seen in dogs. However, they conclude:

“This study provides the first objective evidence to support the commonplace belief that allowing dogs to repeatedly jump clear from vehicles with high boot compartments may be inadvisable.”