MRCVSonline cannot control these cookies from outside sources and we advise you to check with the relevant third party for more information..
New insights into animal domestication 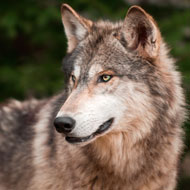 Wild animals such as wolves, pigs and cats may have become domesticated more quickly due to changes in mating behaviour, according to new research by the University of Liverpool.

The benefits of pursuing these are likely to have outweighed the cost of defending access to a single mate.

“It follows that if early domestic females mated with multiple males, both wild and domestic, the more abundant and higher quality sperm of the early domestic male would out-compete the sperm of wild males.

“This could explain the reduction in transfer of genes between wild and increasingly domesticated populations.”

There are a number of advantages to polyandrous mating - for the males, it improves sperm production and quality, while for female animals, there is a benefit to their fitness and a reduction in unwanted advances.

Researchers say this prompts a rapid change in reproductive traits and competitive fertility and could explain why domesticated animals show “dramatically different social behaviours” to their wild ancestors.

Whilst the research team accepts that the main driving force behind the domestication of wild animals is habitat preference and human selection, further research could improve understanding of how changes in mating behaviour contributed to this process.