MRCVSonline cannot control these cookies from outside sources and we advise you to check with the relevant third party for more information..
Record number of puppies seized from smugglers 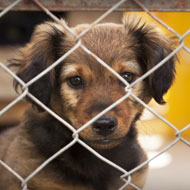 Dogs Trust has issued new advice for anyone considering purchasing a puppy.

Dogs Trust issues new advice in the run-up to Christmas

An investigation by the Dogs Trust has revealed a record number of puppies being smuggled into the UK as the Christmas puppy trade gets underway.

In a statement, the organisation said nearly 100 puppies were seized in just one week during a covert operation at the UK border. It says this figure is ‘just the tip of the iceberg’ as it expects many more puppies will be smuggled into the UK as the festive season approaches.

In light of their findings, Dogs Trust has issued new advice for anyone considering purchasing a puppy to ensure they are not tricked into buying one that might have been smuggled. The advice includes what to look for when buying a puppy, what to ask when meeting the puppy for the first time and why it is important to meet the puppy’s mother.

“Whilst many people’s purchases may be well intended, unbeknown to them the internet has become a thriving marketplace for advertising illegally imported puppies,” said Dogs Trust veterinary director Paula Boyden. “Buying an illegally imported puppy could potentially cost well-meaning but unsuspecting families thousands of pounds in quarantine and vet bills and emotional heartache for the family if the puppy falls ill or worse, dies.”

Under the Non-Commercial Movement of Pet Animals (Amendment) Order 2011, the maximum sentence for illegally importing puppies is three months. But with importers still making thousands of pounds every year, Dogs Trust says the punishment is not strong enough to deter them.

The charity is now calling on the government to increase penalties for those who illegally import puppies and for a significant overhaul of the pet checking system at ports. Paula says that members of the public also have a crucial role to play.

“We urge anyone who is considering getting a puppy this Christmas or beyond, to make sure a dog is for life not just for Christmas. Please do think about the breed and your lifestyle as well as following buyer advice to help limit the chances your puppy is a smuggled one.”