MRCVSonline cannot control these cookies from outside sources and we advise you to check with the relevant third party for more information..
Deadly fungus threatens Darwin’s frog 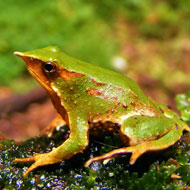 "...infected populations of Darwin’s frogs are destined for extinction.”
Species facing extinction due to chytridiomycosis


The highly threatened Darwin’s frog could be ‘heading for extinction’, scientists say, after new research shows they are infected with the amphibian fungus chytridiomycosis.

International researchers found the species is infected with the fungal pathogen Batrachochytrium dendrobatidis (Bd). Despite a lack of obvious short-term mortality, researchers have noticed population declines. They say the species is at ‘serious risk’ of extinction within 15 years of contracting the disease.

This emerging infectious disease has ravaged global amphibian populations, but until recently, Darwin’s frog was thought to have remained fairly stable. However, scientists now believe the frogs were infected over a decade ago, with the impacts only just being observed.

Urgent conservation action is needed in light of this new revelation.

“Put simply, this study shows that once an individual animal becomes infected with Bd, it is almost certain to die,” says first author Dr Andrés Valenzuela.

“Unusually for an infectious disease even at very low rates of infection, and in the absence of the dramatic die-offs witnessed in other amphibian populations impacted by this disease, infected populations of Darwin’s frogs are destined for extinction.”

Co-author Professor Andrew Cunningham from ZSL, said the implications of these findings could be equally dire for many other species.

“This ‘cryptic’ nature of infectious disease witnessed among Darwin’s frogs in Chile could potentially be causing similar ‘slow-burn’ declines among wildlife species elsewhere – contributing to longer-term population declines and extinctions despite the lack of obvious mass-mortalities”.

Darwin’s frogs are native to the forests of southern Argentina and Chile. They were named after Charles Darwin who discovered them during the voyages of the HMS Beagle.