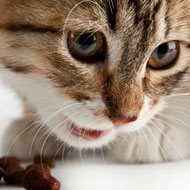 Before exhibiting the typical neurological signs, cats may initially present with decreased appetite, nausea and vomiting.

Following a spate of thiamine deficiency cases linked to commercial cat food, the RVC has published information on diagnosing and treating the condition.

Earlier this month, Pets at Home recalled four of its dry cat food products after tests confirmed they contain lower levels of thiamine (vitamin B) than is specified in the recipe.

The retailer became aware of the problem after three cats were presented to the RVC displaying signs of thiamine deficiency. The College documented classic changes to the brain on MRI scans and noted a rapid clinical response to thiamine administration.

‘Our investigation found a common denominator in that each cat was being fed the same commercial cat food,’ the RVC writes on its website.

Because early recognition is important, the College are advising owners to seek help from a vet as soon as possible if they suspect their pet may be affected.

‘All three cats treated at our hospital survived, but one patient has persistent neurological abnormalities six months after initial diagnosis that will likely be permanent as a result of the structural damage to the brain caused by thiamine deficiency,’ they explain.

‘The neurological signs associated with thiamine deficiency in cats can appear within 30-40 days after transitioning to a thiamine-deficient diet, and the clinical course tends to be sudden and rapidly progressive.’

The RVC adds that, before exhibiting the typical neurological signs, cats may initially present with decreased appetite, nausea and vomiting.

When treating cats with thiamine deficiency, the RVC advise a rapid administration of injectable thiamine, followed by a transition to oral thiamine supplements for one month and changing the diet to a different high-quality cat food.

‘If cases of thiamine deficiency are recognised and treated rapidly during the early stages of disease, full clinical recovery is possible,’ the College continues.

‘However, some cats may end up with permanent neurologic deficits or never recover from the initial presented clinical signs, and so rapid recognition of the condition is important to improve the chances of full recovery for these cats.’