MRCVSonline cannot control these cookies from outside sources and we advise you to check with the relevant third party for more information..
H. lusitanicum tick imported into UK on a dog 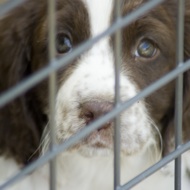 A Hyalomma lusitanicum tick has been imported into the UK on a dog that had recently returned from Portugal.

A Hyalomma lusitanicum tick has been imported into the UK on a dog that had recently returned from Portugal and submitted to Public Health England’s Tick Surveillance Scheme (TSS).

The discovery was reported in Veterinary Record (Vol 179 - No 16) by Public Health England and the Instituto Nacional de Saúde Dr Ricardo Jorge.

It is the first known record of H. lusitanicum in the UK and the second Hyalomma species detected by the TSS. In 2009, a single Hyalomma marginatum male was imported into the UK on a horse that was also from Portugal.

‘This importation event provides evidence of the potential for movement of Hyalomma species from endemic areas into the UK via dogs, a route that has not been considered previously,’ the authors write.

‘The absence of published reports of this tick species feeding on dogs in endemic areas and the lack of evidence of this species on recently travelled dogs in the UK based on TSS and Big Tick Project data suggests this is an extremely rare importation event.’

H. lusitanicum ticks are common in Southern Europe where conditions are warm and dry. While they are mostly associated with domestic and wild ungulates, reports show they have also bitten dogs and humans.

H. lusitanicum is an important vector of Theileria annualata - a major cause of livestock disease -  and Crimean-Congo haemorrhagic fever virus (CCHFV) - a disease that can be fatal in humans.

In September 2016, health authorities in Spain reported two confirmed cases of CCHFV - the first instance of local transmission of CCFH in Europe. The primary case - a 62 year-old-man - died in hospital in Madrid. He had no history of travel, but noticed a tick bite after a country walk in Avila, Castilla-León.

Due to the significance of CCHFV, Public Health England tested the tick that was imported into the UK, but no CCHFV RNA was detected.