MRCVSonline cannot control these cookies from outside sources and we advise you to check with the relevant third party for more information..
RVC issues warning over microchip case 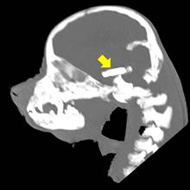 An exemption certificate can be provided in cases where, in the vet's professional opinion, microchipping could adversely affect the health of the dog.

A seven-week-old female Chihuahua, weighing just 750g, was referred to the hospital after a microchip was accidentally placed through the caudal aspect of the skull, into the rostral brainstem. Due to the chip's location, the decision was made to leave it in place.

The puppy initially showed marked neurological dysfunction as a result of traumatic brain injury, but since then a remarkable improvement has been observed and vets say there is no apparent compromise to the animal's welfare.

The microchip was placed by an implanter, trained and approved under section nine of the Microchipping of Dogs (England) Regulations 2015. The regulations, which came into force in April of this year, make it a legal requirement for all dogs to be microchipped by the age of eight weeks.

Writing in Vet Record, neurologists said they wanted to raise awareness of the certificate of exemption, which is available from Defra. The certificate can be provided by a veterinary surgeon in cases where, in their professional opinion, microchipping could adversely affect the health of the dog.

They advised implanters to seek the advice of a veterinary surgeon if they are unsure about the suitability of a dog for microchip implantation.