Cookie use on MRCVSonline
We use cookies to ensure that we give you the best experience on our website. If you continue without changing your settings, we will assume that you are happy to receive all cookies.
Accept Policy
Change cookie settings
All leading supermarkets commit to end sale of caged eggs 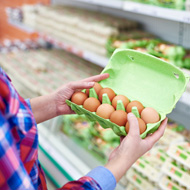 All leading supermarkets in the UK will be making the move to cage-free production.

All leading supermarkets in the United Kingdom have now pledged their commitment to end the sale of caged eggs by 2025.

According to animal welfare charity Compassion in World Farming, Asda and Lidl now join Iceland, Morrisons and Aldi in their move to cage-free production.

Other retailers including Marks and Spencer, Sainsbury's, Waitrose and The Cooperative stopped selling eggs from caged systems years ago.

The announcement follows a petition launched by teenager Lucy Gavaghan, signed by over 185,000 supporters.

A Compassion in World Farming spokesperson described the move as 'a truly momentous turning point for egg laying hens in the UK'.

"With more and more companies pledging to join the growing cage-free movement worldwide, it is clear that the food industry is evolving and finally starting to see animal welfare at its heart," they add.

Farmers Weekly reports the supermarkets are now in consultations with egg suppliers over what will be the new standard for cage-free eggs.

A likely replacement is barn production - where birds are kept indoors but have freedom to roam a shed.