MRCVSonline cannot control these cookies from outside sources and we advise you to check with the relevant third party for more information..
Cat owners warned about the dangers of lilies 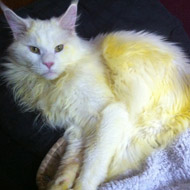 Haggis had a lucky escape from lily poising after brushing up a bouquet of lilies.

Flower is highly toxic to cats

International cat charity iCatCare will be focussing on the danger that lilies pose to cats this month as part of their 'Keeping Cats Safe' campaign.

The charity are spreading the message to cat owners that they should never keep lilies in the home and, if they suspect that their cat has been exposed to lilies, that they should seek veterinary advice immediately.

Lillies are often used in flower arrangements for their attractive appearance and fragrance. However, many owners are still unaware of the danger they pose to their cats.

Eating any part of the lily, or even drinking the water from a vase with lilies in it can be extremely dangerous. Once ingested, the toxin can cause severe damage to the kidneys, and in severe cases the kidneys fail completely.

Signs of poisoning include drooling, vomiting, refusing food, lethargy and depression and a vet may find enlarged and painful kidneys on examination.

Earlier this year, a striking maine coon cat called Haggis had a lucky escape from lily poising after brushing up a bouquet of lilies, the pollen from which turned his white fur yellow. Had Haggis begun to groom the pollen from his fur, he could have almost certainly have suffered kidney damage and may have died.

Thankfully Haggis' owner checked to see whether lily pollen could be dangerous and acted immediately. Haggis was washed and taken straight to his vet where he was put on intravenous fluids. Two days later, Haggis was allowed home with no adverse effects.

Claire Bessant, Chief Executive of iCatCare said: ‘The unusual thing about the case of Haggis is that the outcome was good, which sadly is quite often not the case. Many owners are still unaware of the danger of lilies to their cats and cats often die as a result of poisoning. We hope that this campaign and the case of Haggis will highlight the danger.’

Information for owners and veterinary professionals are now available on the iCatCare website including a downloadable 'lethal lilies' poster.

ICatCare say that they will continue to raise awareness of this campaign and will be working more closely with supermarkets and florists on clearer labelling of bouquets and flower arrangements which contain lilies.