MRCVSonline cannot control these cookies from outside sources and we advise you to check with the relevant third party for more information..
Elderly dog raises thousands for poorly pets 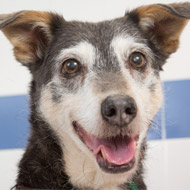 Bisto has been recognised for her services to the PDSA as an honorary fundraiser.

A 20-year-old dog from Glasgow has been dubbed 'creme of the fundraising crop' by vet charity PDSA, after helping to raise £48,000 for poorly pets in the area.

Crossbreed Bisto is a regular attraction at Glasgow Central station and has been helping PDSA fundraiser Julie Gillespie raise funds for the charity for over 10 years.

Juie explains: “I was minding Bisto for her owner Muriel while she was on her summer holiday and had planned to do some fundraising with the group at Glasgow Central. Not wanting to leave Bisto alone, I brought her with me and our takings doubled!

She is a real people dog – everyone is so drawn to her – they can’t resist those puppy dog eyes! We get so many people coming over to say hello to her when we are in the station and more often than not, they stick a few pence in our bucket for the privilege!

“Because Bisto was such a hit and she enjoyed it so much, we decided to make her a regular attraction whenever we fundraised at the station and ten years on, she is still going strong!”

With Bisto's help, the fundraising group say that they netted an average of £600 in one day. The money will aid two PDSA Pet Hospitals in the city, which treat over 300 animals every day.

Hannah said: “Bisto has made an outstanding contribution to PDSA and has raised a staggering amount of money for poorly pets locally. It costs over £2.3 million to run our two hospitals each year, so the work of the fundraising group is vital to making sure that we can continue to provide our service to the pets that need it most.”