MRCVSonline cannot control these cookies from outside sources and we advise you to check with the relevant third party for more information..
Animal welfare campaigner wins British Citizen Award 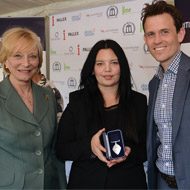 British Citizen Award presentation to Nicky Stevens by Baroness Wilcox and Will Gore (deputy managing editor of the i Newspaper).

A UK-based animal welfare campaigner has been awarded a British Citizen Award for her work helping stray dogs in Borneo.

Nicky Stevens, founder and chief executive of International Aid for the Protection & Welfare of Animals (IAPWA), has been honoured with a British Citizen Award for international achievement in respect of her personal efforts to help improve the lives of stray dogs in Borneo.

Kota Kinabalu, the capital city of the state of Sabah in Borneo, is one of the fastest growing cities in Malaysia. Despite being a major industrial and commercial centre, as well as a popular tourist destination, it is estimated that around 10,000 stray dogs currently live on its streets.

Nicky Stevens explained: "I first visited Kota Kinabalu in 2009. Although I quickly fell in love with Borneo I was saddened to see so many dogs suffering on the streets of the city and I made a commitment to do everything that I could to help create a better future for these animals. When I returned home to the UK I set up the charity International Aid for the Protection & Welfare of Animals (IAPWA)."

Following her trip, Nicky regularly made visits to Kota Kinabalu to attend meetings with the local government in the hope of finding a mutually acceptable way to care and protect its stray animals.  Her efforts eventually paid off, and in 2014 IAPWA took over management of the city dog pound.

Thanks to its supporters IAPWA has so far been able to provide care to more than 1,200 stray dogs. As well as managing to dog pound, IAPWA also provides a rehoming service to dogs that are unable to cope on the streets and engages with and helps educate the local community about responsible pet ownership.

The British Citizen Awards are held bi-annually to reward everyday individuals and their contribution to society.

Nicky Stevens added: “I feel extremely humbled and proud to have been honoured with a British Citizen Award and would like express my sincere thanks to everyone that has been involved with IAPWA over the last five years – especially our employees, volunteers and much valued donors – as it is their hard work, dedication and support that has made it possible for IAPWA to care for so many stray dogs in Borneo.”