MRCVSonline cannot control these cookies from outside sources and we advise you to check with the relevant third party for more information..
Centre launches to fight East Coast fever disease 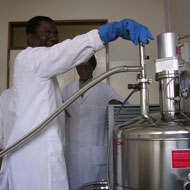 Vaccine to be distributed in 11 African countries

A new centre for ticks and tick-borne diseases opened in Malawi last week to help fight East Coast fever (ECF) disease, which kills one cow every 30 seconds in Africa.

ECF is the single biggest cattle killer in 11 countries in Eastern and parts of Central Africa, where the disease is endemic. The Centre for Ticks and Tick-Borne Diseases (CTTBD) will deliver the "one shot for life" Mugaga cocktail vaccine. It will help protect 25 million cattle across the 11 countries.

"Tick-borne diseases are known to be one of the major constraining factors to the development of the livestock industry especially in Africa," said Dr Nkhwachi Gondwe, acting director of CTTBD.

"We are launching CTTBD at the right time to enhance the prevention of ECF in the region in order to realise the potential of the livestock industry and to protect human lives and address poverty."

ECF has a devastating impact on the livelihoods of those who depend on their cattle. "Nearly 900 million people in Africa rely on livestock for their livelihoods," said Peter Jeffries, chief executive officer of the Global Alliance for Livestock Veterinary Medicines.