MRCVSonline cannot control these cookies from outside sources and we advise you to check with the relevant third party for more information..
Great Bear Rescue celebrates largest rescue in Armenia 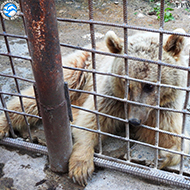 "The six new arrivals can look forward to happier times ahead and that goes for all the bears still awaiting our help" - Alan Knight OBE.

FPWC and IAR worked together to rescue six caged bears.

UK-based charity International Animal Rescue (IAR) has announced that The Great Bear Rescue campaign has carried out its largest bear rescue in Armenia yet.

Foundation for the Preservation of Wildlife and Cultural Assets (FPWC), IAR's partner organisation on the ground in Armenia, carried out the operation, rescuing six caged bears from a private zoo.

The team were invited to undertake the relocation operation by Zhanna Hayrapetyan, daughter of the late businessman Levon Hayrapetyan, as the family owns the zoo.

IAR president Alan Knight OBE, said: “This is the biggest bear rescue mission FPWC and IAR have accomplished together.

“Any rescue operation that involves anaesthetising captive wild animals requires meticulous planning and execution to ensure the safety and welfare of animals and people. The translocation went like clockwork.

“Congratulations to Ruben Khachatryan and the FPWC team on a job well done. Now we must turn our attention to caring for the bears, providing them with nutritious food and veterinary treatment to improve their health and give them the lives they deserve.”

Set up in 2017, The Great Bear Rescue campaign rescues caged bears in Armenia and provides them with a secure and semi-natural environment at FPWC's wildlife rescue centre, where they can rehabilitate and live the lives that bears should in a safe space.

Thus far, IAR and FPWC have rescued 35 bears from horrific conditions in small, unclean and enrichment-lacking cages in private locations, including restaurants, factories and petrol stations.

Knight explained that among the recent rescue were two young cubs and their mother, he said: “Once the bears have completed their time in quarantine and passed all the medical checks to ensure they are healthy, it will be a joy to see them get their first taste of the outside world.

“It will be delightful to see the little cubs with grass and soil under their paws for the first time, rather than the muck they’ve been standing on in their cages.”

The rescued bears now have large and spacious outdoor enclosures, with pools to bathe in, underground dens to hibernate in and are provided with plenty of environmental enrichment to keep them happy and healthy.

Ruben Khachatryan, director of FPWC, added: “In October 2017 FPWC launched a massive bear rescue programme in cooperation with International Animal Rescue. We are glad that the organisation is always by our side, supporting the implementation of our programmes.

“As an associated member of EAZA, the European Association of Zoos and Aquariums, FPWC has created conditions for animals that meet all the norms and standards to ensure their wellbeing.”