MRCVSonline cannot control these cookies from outside sources and we advise you to check with the relevant third party for more information..
Vets issue toxic blue-green algae warning 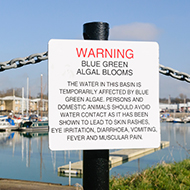 The BVA has issued its annual warning to pet owners over risks of deadly blue-green algae.

BVA is reminding dog owners to be alert and aware.

Pet owners are encouraged to take extra precautions when walking dogs around freshwater bodies, as blue-green algae growth poses a fatal risk to the animals.

The BVA is advising owners:


Justine Shotton, BVA president, explained to dog owners: “Many dogs love nothing more than a paddle in a lake to cool off in this weather, but we’d urge pet owners to keep them on a lead during walks near water bodies confirmed to have algal blooms this summer.

“The majority of blooms are toxic and it is impossible to tell the difference visually, so it is better to be safe than sorry.”

As the BVA highlights, there have been recent reports of algal bloom sightings in lakes, ponds and rivers across the UK, with around 50 confirmed locations identified by the UK Centre for Ecology and Hydrology (UKCEH) on its Bloomin' Algae app.

Dr Shotton reminded pet owners of the symptoms, reiterating the importance of being aware of them. She said: “These commonly include vomiting, diarrhoea, drooling, disorientation, trouble breathing, seizures, and blood in faeces.

“They can appear within a few minutes or hours of exposure, depending on the type of toxin ingested, and can cause liver damage and ultimately be rapidly fatal if left untreated.

“There is currently no known antidote for the toxins, so dog owners should seek prompt veterinary treatment to tackle their effects and ensure a good chance of recovery for their pet.”