MRCVSonline cannot control these cookies from outside sources and we advise you to check with the relevant third party for more information..
MSPs meet with Cats Protection 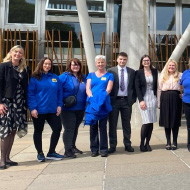 Pictured: MSPs with members of the Cats Protection team.

Attended by 25 MSPs, the event took place on 16 June at Holyrood, and was held to educate MSPs on how they can best support Scottish cats and their owners, highlighting current concerns and campaigns for MSPs to be aware of.

“It was wonderful to welcome so many MSPs who were keen to find out how they can support cats and the people who care about them,” said Alice Palombo, Cats Protection's advocacy and government relations officer for Scotland.

“Scotland is a nation of cat lovers, with 20% of households owning one, so their welfare is important to a huge number of people.”

The event was sponsored by Mark Ruskell, MSP for Mid-Scotland and Fife, who enthusiastically promoted it on Twitter, sharing images of himself with a giant kitten banner, and cat-shaped biscuits.

The charity has revealed that its campaign to encourage more landlords to allow tenants to keep pet cats was discussed at the parliamentary reception, as well as its calls for compulsory microchipping of pet cats in Scotland.

Alice explained the importance of the event for keeping MSPs up-to-date on key feline welfare discussions: “While Scotland already has some strong legislation in place to protect cats, there is always more that can be done, such as banning snares and introducing fireworks licensing.”

“We were pleased to discuss these priorities with so many MSPs as part of our work to help cats in Scotland.”