MRCVSonline cannot control these cookies from outside sources and we advise you to check with the relevant third party for more information..
Mission Rabies celebrates milestone education achievement 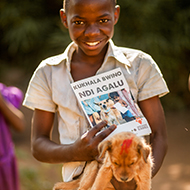 The lifesaving lessons are delivered to primary school-aged children in rabies hotspot areas.

The charity has delivered lifesaving lessons to five million children.

Global health charity Mission Rabies is celebrating after educating five million children worldwide since it was founded in 2013.

The milestone forms part of the organisation's work to deliver rabies prevention lessons to schools and local community groups in rabies hotspots, such as Ghana.

Rabies kills around 59,000 people annually, the majority being children under the age of 15. It has the highest fatality rate of any infectious disease, and once symptoms show, it is already too late for treatment.

Misison Rabies runs dog mass vaccination campaigns in India and Malawi, some of the world's worst hotspots for the diease, in collaboration with the local governments and other non-governmental organisations (NGOs).

The aim of the educational sessions is to increase awarneess of rabies and equip individuals with the knowledge to protect themselves from dog bites and save lives. Correctly washing the wound can lower the chance of trasmission by a third, while receiving vaccination immediately after an exposure can save a child's life.

Speaking on the importance of educating children, Dr Murugan Appupillai, education director, India, said: “Many children in rabies endemic countries care for a dog in their household or play alongside street dogs on the way to and from school. Death is inevitable once symptoms develop, which is why receiving post-exposure treatment is so vital.

"It really is a lack of awareness that kills people. If the risks are widely understood and appropriate dog bite treatment known, then rabies is 100 per cent preventable.”

The lessons, delivered by the charity's education team, are focussed at primary school-aged children. They cover the dangers of rabies, how to be safe around dogs, and the steps to take if they receive a bite from a potentially rabid dog.

Dr Luke Gamble,CEO and founder of Mission Rabies, said: “It is amazing to reach this milestone. Education, alongside vaccination and surveillance, is one of the cornerstones in eliminating canine transmitted rabies. Explaining what rabies is, how to avoid being bitten by a dog, and what to do if you are bitten by a dog, is fundamental in protecting communities.

“In places where PEP (post-exposure prophylaxis) is scarce and where treatment options are limited, then our advice can mean the difference between life and death. I’m so proud of the Mission Rabies education teams; they are inspirational to have reached five million children and they have made a real difference in protecting children who are at risk of this terrible disease.”