MRCVSonline cannot control these cookies from outside sources and we advise you to check with the relevant third party for more information..
African Swine Fever confirmed in Italy 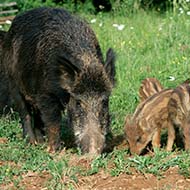 The Piedmont regional government has increased its surveillance of wild boars and hog farms.

Discovery is “another huge geographical leap for the virus", says National Pig Association.

A case of African Swine Fever (ASF) has been identified in a wild boar in Italy for the first time.

Following a string of ASF cases across Europe, officials confirmed the disease in a dead boar in the Italian region, Piedmont, located in the north of the country.

The Piedmont regional government has increased its surveillance of wild boars and hog farms, while city mayors have been asked to cease hunting.

Piedmont's health deputy, Luigi Icardi, explained: "As in the case of the (COVID-19) pandemic, the African swine fever emergency must also be addressed by appealing to everyone's collaboration. Piedmont health system is working alongside operators in the sector to prevent the circulation of the virus and protect swine farms."

The National Pig Association said the discovery marks another ‘geographical leap for the virus’, as it has occurred much further south of recent cases in Germany, Poland and west of several confirmed in eastern Europe.

It believes that Italy is now likely to face the suspension of pork to third-country markets, as is what happened to Germany after confirming ASF in wild boar in September 2000.

“The German and wider EU sector is still feeling the impact of the ongoing ban by China,” said the NPA. “It will be interesting to see whether Italy looks to mirror the deal France has just secured with China, which ensures a regionalised approach to exports in the event of an ASF outbreak in France.”

ASF is a notifiable disease of pigs that has caused serious production and economic loss across the globe. While the risk of infection in the UK is currently considered to be low, the condition is highly contagious and can result in death for almost all pigs that are infected