MRCVSonline cannot control these cookies from outside sources and we advise you to check with the relevant third party for more information..
Giant rabbits susceptible to unusual fracture 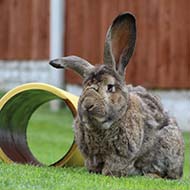 "It is important that vets and owners are aware of the apparent increased risk of fractures." - Professor Dylan Clements.

The underlying reason for this is unclear, researchers say.

Researchers and veterinary surgeons at the University of Edinburgh have discovered that giant breed rabbits are at risk of an unusual, but recoverable, type of fracture.

This discovery was made when four male neutered continental giant rabbits aged between 10 and 30 months were presented at the Dick Vet with femoral condylar fractures, all of which developed without a traumatic injury being observed.

The fracture occurs at the end of the thigh bone, where it forms the knee joint with the lower leg, and the underlying cause of this unusual fracture affecting this breed is unclear.

The study, published in the Journal of Small Animal Practice (behind a paywall), details four cases presented to the practice, in which stabilisation was achieved with screw fixation in all four rabbits, with additional fixation in three of the cases.

Of the four rabbits presented, three recovered normal limb function, whilst one developed a femoral fracture as a consequence of the surgical intervention, and was treated with an amputation.

The results of the study suggest that giant rabbits' predisposition to the fracture could be weakness in the bones, or that the fractures are caused by stress.

Professor Dylan Clements, professor of small animal orthopaedics, commented: “This is a very uncommon fracture, yet we saw it only in a less common breed of rabbit.

“It is important that vets and owners are aware of the apparent increased risk of fractures of this sort in Continental Giant breed rabbits.”