MRCVSonline cannot control these cookies from outside sources and we advise you to check with the relevant third party for more information..
Scottish SPCA pledges time to Summer Clean campaign 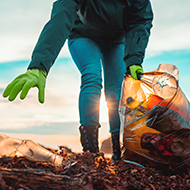 The Paws on Plastic campaign aims to get dog walkers involved in litter clean-up.

The charity has pledged 500 miles to the Keep Scotland Beautiful initiative.

The campaign, which is running from 28 May until 20 June, requests that people pledge time to pick up litter. Staff at the animal charity will be taking part in the Paws on Plastic initiative, which encourages people to pick up a minimum of two pieces of litter per dog walk.

Scottish SPCA received 273 calls to its helpline specifically about animals affected by litter between January and May 2021. At almost two incidents per day, the charity is very aware of the devastating effects of litter on animals.

Chief superintendent of the Scottish SPCA, Mike Flynn, said: “We see first-hand the devastating consequences litter can have on animals. Seals and birds get caught up in fishing line or wire or animals can ingest small pieces of rubbish and choke or die.”

“We are proud to be making a difference by taking part in Paws on Plastic for the Keep Scotland Beautiful’s Summer Clean.”

Barry Fisher, CEO of Keep Scotland Beautiful, said: “We are delighted that the Scottish SCPA has pledged 500 miles to keep Scotland beautiful this month. We’ve warned of a looming litter emergency and our surveys show an increase in the number of sites surveyed being severely littered – but the Scottish SCPA has seen first-hand the horrific impact litter can have on animals.”

“With the support of thousands of people across Scotland who are pledging to get outside and do some litter picking as part of our Clean Up Scotland Summer Clean this month, we know that together we can make a difference. Not only will removing litter from our country help protect our wildlife and domestic animals from potential injury, it will also help our own health and wellbeing and that of our economy.”