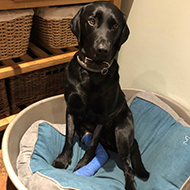 Labrador retriever Molly was successfully treated for Alabama rot after contracting the disease just before Christmas.

The new outbreaks were identified in Herefordshire, Greater London and Exeter, prompting Anderson Moores to issue a warning to dog owners and vets to be on their guard for the disease.

Team leader David Walker, a European specialist in small animal internal medicine and the UK’s foremost authority on the disease, said: “We’re very sad to confirm three new cases of CRGV already in 2021. Unfortunately, we find ourselves at the time of year when cases are most commonly identified.

“As well as these confirmed cases, we are awaiting results on a number of other dogs that have sadly been euthanised with suspected CRGV. It is understandably a worrying time of year for dog owners with regards to CRGV; however, the disease remains rare.

“We’re advising dog owners across the country to remain calm but vigilant and seek advice from their local vets if their dog develops unexplained skin lesions.”

CRGV is a serious, often fatal disease of the kidneys. It was first detected in the UK in 2012 and has since been identified in multiple locations across the country, including Gloucestershire, Surrey, Derbyshire, Yorkshire, Lancashire, Cornwall, Devon and Staffordshire.

Mr Walker added: “Treatment primarily revolves around intensive management of the acute kidney injury and is sadly only successful in around 10 per cent of cases. However, the team here at Anderson Moores successfully treated a suspected case of CRGV in a Labrador retriever.

"Molly was referred to our internal medicine team just before Christmas due to limb swelling and a deep, painful ulcerative lesion on one of her legs. Following four days’ intensive treatment, her condition started to improve and we began to cautiously hope she would survive the disease.

"Molly continued to slowly improve and, after two nerve-wracking weeks, she was discharged to continue her recovery at home. Recovery for patients such as Molly is often prolonged but she has continued to do well."