Cookie use on MRCVSonline
We use cookies to ensure that we give you the best experience on our website. If you continue without changing your settings, we will assume that you are happy to receive all cookies.
Accept Policy
Change cookie settings
Vets urge 'I'm a Celebrity' producers to review the show's treatment of animals 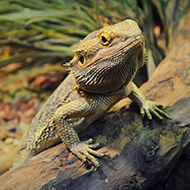 The BVA is urging the public to join them in calling on producers to #GetAnimalsOutofThere.

BVA raises concerns over use of animals for entertainment

The British Veterinary Association (BVA) has expressed serious concerns over the use of animals in the television programme 'I'm a Celebrity Get Me Out of Here!', which entered its twentieth series earlier this month.

Since the show began in 2002, 'I'm a Celebrity Get Me Out of Here!' has received criticism from animal welfare organisations and the general public regarding its mistreatment of animals, particularly during the 'Bushtucker trial' segments of the programme.

The BVA published an open letter to the show's producers in 2019, citing examples from the programme where animals were in clear distress and compliance with the 2006 Animal Welfare Act ‘duty of care’ did not appear to have been met.

Although COVID-19 restrictions have led to a change in location for the latest season of 'I'm a Celebrity Get Me Out of Here!', many organisations were disappointed to learn that the show's producers did not take this opportunity to change the way animals are used in the programme.

BVA senior vice president Daniella Dos Santos said: “‘I’m a Celebrity’ has had a long and chequered track record of animals showing clear signs of distress while used in tasks and as an exotics vet, I remain very concerned about the welfare of those used in this year’s series.

“The welfare of animals used on television or other media outlets should be of the highest standard as this can influence public behaviours and views on appropriate treatment of animals.”