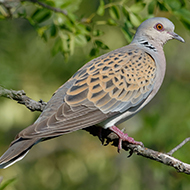 Charity calls for action as scale of environmental decline is revealed

The RSPB is calling for the government to establish legally binding targets to restore nature by 2030, as well as a green recovery from the COVID-19 pandemic throughout the country, as part of its new ‘Revive our World’ campaign.

The charity’s 2019 State of Nature report revealed that British wildlife is continuing to decline, with 41 per cent of species assessed having decreased over the past 10 years. 15 per cent of all wildlife in the country is now under threat of extinction and two per cent is already extinct.

The new campaign’s launch coincides with the release of a major report from the UN which, according the RSPB, will show a ‘global failure’ to halt the decline of nature over the last decade.

Ten years ago, the UN devised the Aichi Biodiversity Targets, a 10-year-plan with 20 key targets aimed at protecting and conserving natural systems. The RSPB’s report, ‘A Lost Decade for Nature’ reveals that the UK may have met as little as three of these 20 targets.

The charity has stated that it believes the reason for this failure is that the targets were not legally binding and so governments were not compelled to act.

Beccy Speight, chief executive of the RSPB said: “We need people across the UK to stand up for nature, to let our politicians know this is not good enough and we demand they revive our world.

“Every country in the UK must create legally binding targets to restore nature, invest in nature and green jobs, and support farmers to produce healthy food that’s good for people, climate and wildlife. We have to put our money where our mouth is and use the next decade to do something truly impressive.”

For more information on the Revive Our World campaign and to sign up, please visit the RSPB website.