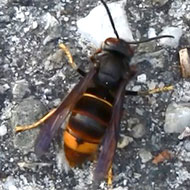 Asian hornets have a distinctive orange stripe on the fourth segment of their sbdomen.

Species has the potential to devastate honeybee populations.

Government officials have urged vigilance after a sighting of an Asian hornet was confirmed in Gosport, Hampshire.

Nicola Spence, Defra's chief plant and bee officer, called on beekeepers and members of the public to keep a lookout for the species, which has the potential to devastate honeybee populations and other native insects.

“By ensuring we are alerted to possible sightings as early as possible, we can take swift and effective action to stamp out the threat posed by Asian hornets,” she said. “That’s why we are working at speed to locate and investigate any nests in the area following this confirmed sighting.”

The Asian hornet is a notifiable non-native species that originates from Asia. It was first identified in France in 2004 and has since spread rapidly throughout the country.

Although Asian hornets pose no more risk to human health than wasps, they are a serious threat to honeybees. Work is ongoing by the National Bee Unit to monitor their activity and to identify any nests.

Asia hornets are notifiable by their black bodies and distinctive orange stripe on the fourth segment of their abdomens. Measuring around 25mm in length, they also have brown legs with yellow tips that look like they have been dipped in paint.

“While the Asian hornet poses no greater risk to human health than other wasps or hornets, we recognise the damage they can cause to honey bee colonies and other beneficial insects,” Ms Spence added. “Please continue to look out for any Asian hornets and if you think you’ve spotted one, report your sighting through the Asian hornet app or online.”

The confirmed sighting in Gosport is the first since October 2019, when two related nests were detected and destroyed in Dorset.